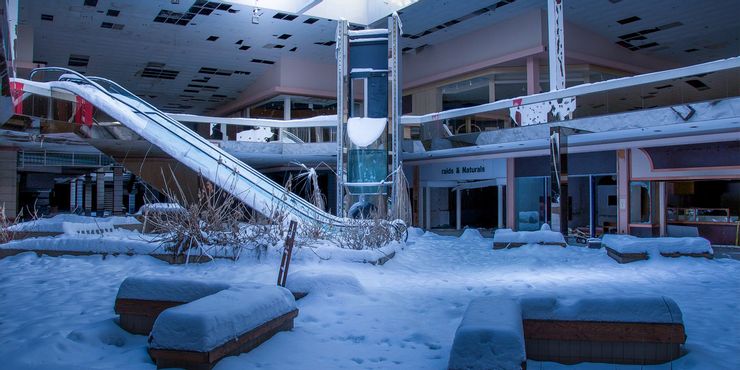 We’re nearing the end of spooky season, but at hundreds of malls in the US, it’s always like this. For nearly quarter of the 1,000+ malls in America, a permanent spooky season is on the horizon.

There is a phenomenon behind abandoned mall photos. Perhaps it’s the juxtaposition of an area that was once lively and bustling now sitting dormant and having succumb to the elements. Just in the United States, nearly 25 percent of traditional shopping malls were expected to close by 2022, and these are pre-pandemic numbers.

YouTuber Dan Bell has nearly 600k subscribers to his channel where he posts his “Dead Mall Series.” Perhaps some of the creepier videos are the malls that are half dead, but still have a handful of shoppers and stores open. The malls sit nearly abandoned and boarded up except for a few stores, yet the traditional mall instrumental music still plays, and the lights are either on or flickering. The comments are an eclectic mix of people feeling true nostalgia for these spaces and others saying the dead mall videos are soothing.

Regardless of how malls look the present, they all had a similar fall. While there is always the debate that the internet is replacing malls, with the internet, many still have value and great opportunities for retailers. Let’s look at ways mall stores can both innovate and capture the past to stay alive.

The Times They Are a-Changin’

I have fond memories of a shopping mall. My first mall memory? Standing in line to buy Beanie Babies. However, the days of electric apple roll-on glitter from Bath and Body Works, a mall pretzel and a pound of candy from the Sweet Factory are long gone.

It would be hard to find a parent that would drop their 13-year-old and friends off at a suburban American mall today and say, “Here’s $10, I’ll be back at 3, meet me outside the food court!” Safety concerns have changed drastically over the years, and malls are one of the hardest hit places. Couple that with changes in consumer behavior and the traditional business model of a mall has been turned on its head. They need to do more to attract and retain retailers than ever before. 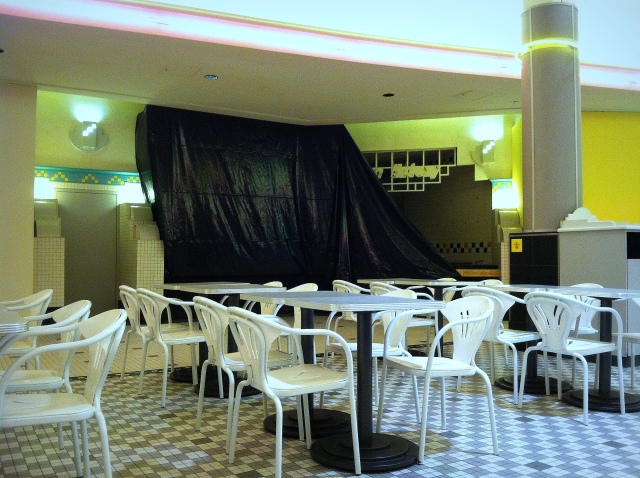 If we were to ask a magic 8 ball in 1995 about the future of malls, we could likely have gotten a, “Reply hazy, try again,” or an, “Outlook not so good.” But would we have believed it?

Between 1956 and 2005, 1,500 malls were built in the US. The post-war 1950s economic boom of the middle class and Eisenhower’s Federal Aid Highway Act lead to a rise of suburbs and access to a new life outside of city centers. A Time Magazine article from 2017 estimated that there is roughly 26 sq. ft. of retail space for every person in the US, compared to 2.5 sq. ft. per person in Europe. It isn’t surprising that small-town malls have struggled to keep retailers when a sustainable population of shoppers isn’t there, and possibly never was.

In the article, consumer trends analysts suggest that the US is simply over retailed. For example, Macy’s plans to close 125 stores by 2023. Of those stores, 60 percent of them are within 10 miles of another Macy’s. 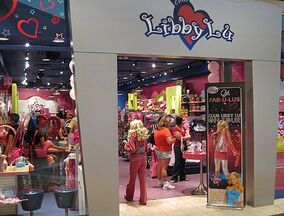 Many retailers are focused on fast fashion and maximizing the ‘basket’ of each shopper, but there is a greater experience to be had. When I think of an interactive mall experience, I think of a few things. There’s photos with Santa and the Easter Bunny, mall fashion shows and one that’s a bit more unconventional: Club Libby Lu. I don’t think of malls as just a hub where I can buy things, going to the mall is a day out – an experience.

A 2000s makeover experience, Club Libby Lu, captured the experience factor well before its time. What was unique was that many of the stores were a store within a store, but almost like a popup inside of anchor stores such as McRae’s, Proffitt’s and Parisian, which were part of the Saks Fifth Avenue portfolio. The experience targeted pre-teen girls and featured makeovers, costumes, fairy dust and a potion bar. Guests were known as VIPs (Very Important Princesses) in the store, and their day would cost anywhere from $25-$60.

The VIP experience sadly ended with the recession and all stores were closed by early 2009. Although there was a lot of critique of the business, overall was a success story of its era. What was different about Club Libby Lu was its location inside of a department store, which gave it a wider audience and the ability utilize the brand power of larger department stores. We see more of these pop-up/concession stands with the like of Kohls, Next, John Lewis, and more.

The store within a store concept has also proven beneficial to JcPenney through their Sephora partnership. The partnership ultimately proved to be more beneficial to the department store than the cosmetics chain, but it undoubtedly offered a temporary revival for the JcPenney brand. In late 2020, Sephora announced they would be leaving JcPenney for the same concept at Kohl’s.

Being creative with the in-store experience pays off. Nike, a leader in the retail world, has a basketball court, treadmills and technology-enhanced athletic experiences that make no profit for the business. They know that they can sell goods through ecommerce, but building a flagship store around experience becomes an attraction and adds more power to the brand.

In the Dan Bell YouTube series, of the malls that were barely hanging on with just a few stores, at least one store is an experience such as an arcade, laser tag, mini golf or a remote-control car track. Malls also present unique opportunities for attractions such as escape rooms, axe throwing and rage rooms.

The reality is, owning a brick-and-mortar business, whether one location or 1,000 locations, has been scary the past two years. In addition to people describing the future of the retail industry with phrases that could be seen on a magic 8 ball, payment technology is changing. There a new electronic payment methods using just your mobile phone, but also new ways to handle your cash.

In the year 2021, when many predicted we would have flying cars, many stores are still counting cash by hand and have yet to modernize their cash management. They are likely keeping an unnecessary amount of cash in-store, and armored car pickups and deposits are not built around their actual cash flow and needs. This is an easy area to see large savings that can be reinvested into the business.

This can be automated through technology that you can get as part of your CIT packages, or direct from manufacturers like Tellermate. Recyclers, smart safes, self-counting cash drawers and desktop cash counters provide a variety of benefits that you wouldn’t expect. You can reduce overtime, improve business intelligence, and even cut your carbon footprint. 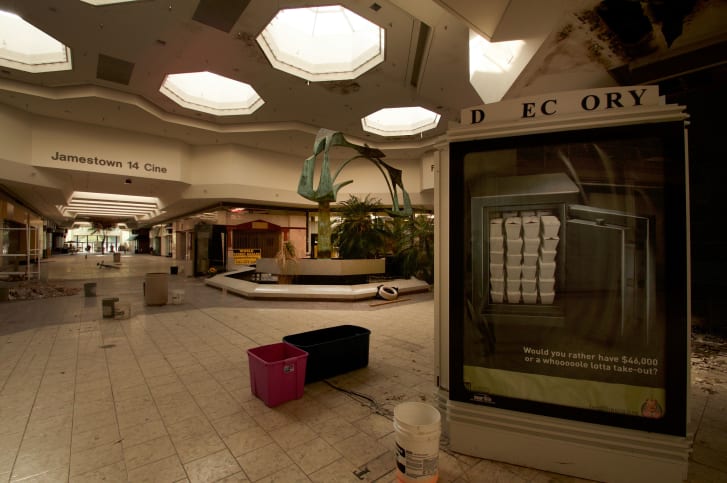 There are malls that will thrive in the future and there are malls that will close. Due to retailers overstretching their property portfolios and changes in consumer behavior, retailers are moving out of malls. Closures of anchor stores such as Sears, Service Merchandise, Lord & Taylor in the US and Debenhams in the UK have all lead to declining confidence in the mall format. It’s hard to attract a new anchor tenant when the existing one has left due to financial decline or overhead expenses. As a mall loses anchor retailers and footfall drops, it’s difficult for them to attract new retailers and to regain their reputation as prime real estate. Smaller retailers know that no matter how great their store is, it is hard to bring traffic to a dead mall. This adds a level of complexity to a retailer managing its property portfolio as they need to monitor the activity of their neighbors and adapt accordingly.

Learning from past mistakes

In 2017, an 800,000 square foot mall had not been built since 2014. From 2002-2009, 37 were built. It seems like property groups and investors in the US have figured out that traditional indoor malls are not the way of the future, but the realization came too late.

Commercial real estate services firm Green Street Advisors classifies grades US malls with the ratings of A++ to D-, based on sales per square foot. Of 1,000 malls in the US, 380 are C- or below. According to Green Street Advisors, the malls most at risk are the B, C and D rated malls. The 125 stores Macy’s will close are mostly in malls with B-D ratings. Macy’s CEO Jeff Gennette said that 65 percent of their stores are in  A category malls, and he believes those stores and the A malls will stay and stand the test of time.

CBL Properties owns 83 malls and power centers in the United States, mostly in the Southeast. They added a pop-up model to their lease offerings in 2017. By 2018, they had converted 10 merchants into long-term lease agreements. Stores can test out the mall format or offer a limited time in-person experience. This benefits both the mall, retailers and customers. With commercial property management ultimately footing the bill for empty stores, retailers can look for opportunities like these to make a mall store work for them.

Property groups and investors are realizing that the property boom during the nineties is not the way of the future. Due to the over retailing of the US, mall stores can best suit themselves through pop-up experiences and keeping locations in malls that have experience-based retailers. By having a clear view of the future, keeping close tabs on moves of anchor tenants and future-proofing store models, there is a path for some stores and experiences to thrive in malls, even those that are struggling.